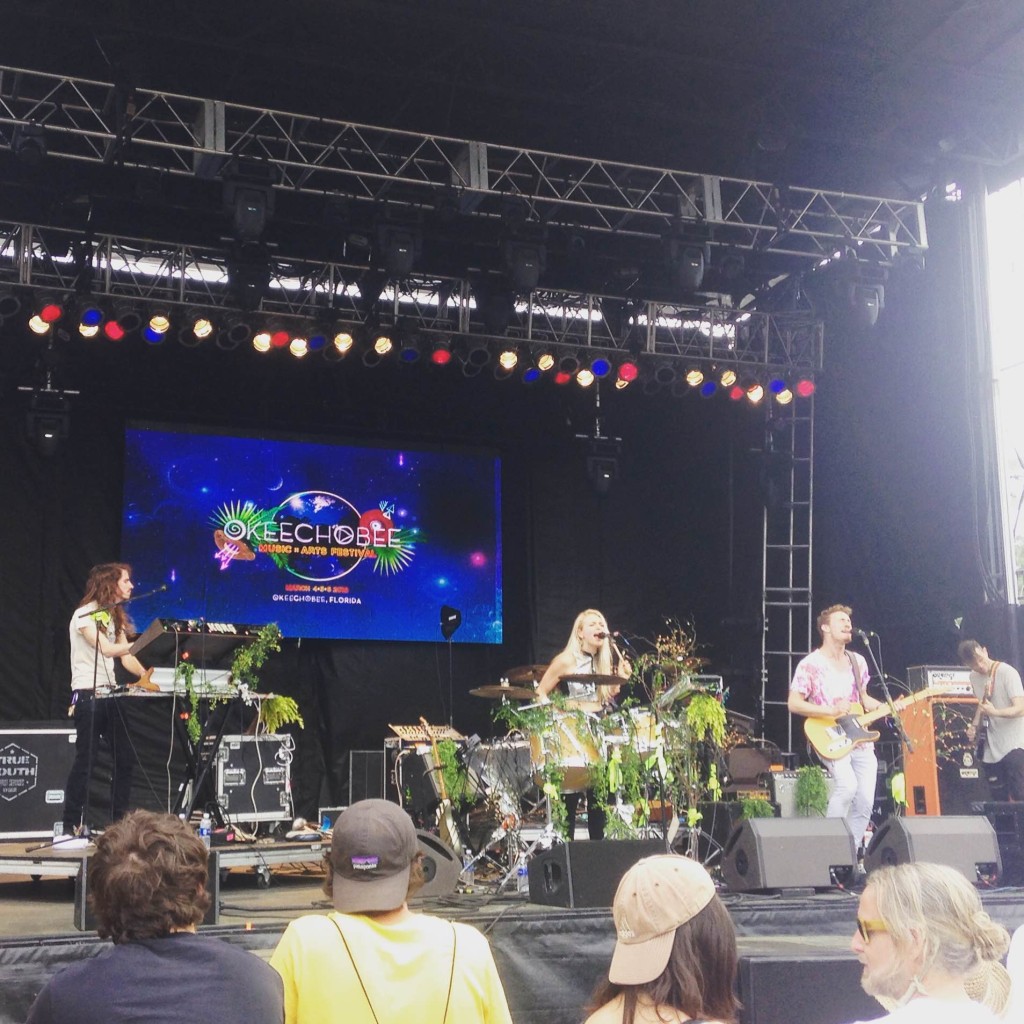 By Sammy Spencer and Bo Kennedy

This year’s Okeechobee Music Festival, held on Lake Okeechobee in Southern Florida, exceeded all of my expectations for a first year music festival. I arrived late on Friday night due to exams, and set up camp that night already feeling a strong positive energy throughout the site. The next day was a whirlwind of amazing experiences, enhanced by the unbelievable art and music that Okeechobee had to offer.

One of the things that took this festival above and beyond was the music, especially for the festival’s inaugural year. Throughout the weekend, our crew was impressed with how talented the organizers were at recognizing good music and putting together a diverse lineup featuring some of the biggest names among underrated artists that had something unique to bring to the table. EVERY (and I mean it when I say every) show that we happened to stumble upon throughout the course of the festival blew us away, whether we were familiar with the artist or not. In two days, we stumbled upon amazing folk in The Avett Brothers, rap/hip-hop in Kendrick Lamar and Post Malone, indie rock in Givers, jazz/funk in Walter “Wolfman” Washington and Kamasi Washington, electronic in Odesza and Gramatik, and so many more.

To diversify the experience, Okeechobee gave festival-goers the break they needed in the Chobeewobee Village. Chobeewobee was an art village including a Ferris wheel, a small beach with its own stage, a food truck village, a tea garden tucked away in the trees, and many other large art installments and interactive projects. For people who were looking to keep dancing at all times, they need only retreat into Jungle 51, Chobeewobee’s techno dance hub hidden amongst the trees. For those who are tired out and needing a break, the “Yogachobee” area offered all-day yoga and massage courses. Chobeewobee was overflowing with creativity, providing a perfectly crafted art experience day and night.

Overall, I cannot praise this festival enough. Not only were the musicians, artists, location, and temperature better than we could have ever imagined, but the energy at this festival was what took it above and beyond. Because this was the first year and this festival is yet to find its vibe, there were people there representing every type of festival-goer. From flow artists to rave groups, from festival veterans to first-timers, from elderly people to children, the vibe of this festival was overwhelmingly loving. Everywhere you looked you were met with a smile, and we left radiating with a positivity we still feel to this day.      – Sammy

Truly, thank you Okeechobee festival for showing us such an unbelievable time. We here at WRVU cannot wait to return next year, and recommend that anyone reading this try to do the same.

Okeechobee Music Festival is organized by the same people who organize Bonnaroo, and the campgrounds have a similar mystic air. However, in its first year of existence, the wide-eyed anticipation of a brand new music festival experience spread like wildfire through the crowds. I was lucky to be a part of it. Allow me to walk you through my Okeechobee experience: 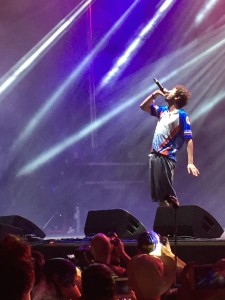 I started my ‘Chobee experience with rapper Lil Dicky. Lil Dicky will be performing at Rites of Spring here on Vanderbilt’s campus this April, and if his Okeechobee performance was any indication, his Vandy show will be a blast. It was naturally a comedic affair, with an a cappella rendition of the national anthem bringing about riotous laughter. The primarily college-aged crowd gobbled up his hits “$ave Dat Money” and closer “Lemme Freak.” Lil Dicky strikes a perfect balance of technical rapping proficiency and wry comedic sensibilities, and this balance is evident in his live show. 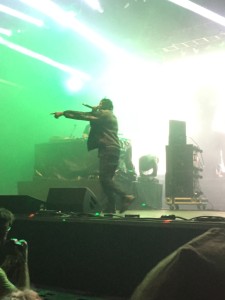 Joey Bada$$ is a New York rapper with wordplay for days and a raspy, aggressive flow. His DJ is the legendary Statik Selektah who added plenty of expert record scratching to the set, as well as played the role of hype man. Joey played mostly tracks off of his B4DA$$ effort from January 2015. Joey allowed his Pro Era compatriot Nyck Caution to play a few tracks off of his highly underrated album “Disguise the Limit.” The set got more and more raucous as it progressed, developing into a DJ set with the female members of the audience all invited on stage. 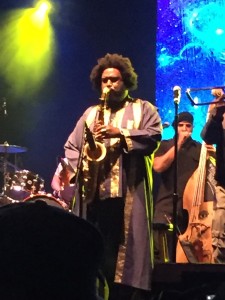 Jazz saxophonist Kamasi Washington is at the forefront of a new wave of jazz coming out of Los Angeles. Although he didn’t draw the largest crowd, it was incredibly upbeat talkative crowd, anxious to hear Kamasi, a master of his craft. He opened with a track off of his latest record “The Epic,” but his set served primarily as a showcase for his band members. Every member of his ensemble had a track that accentuated his/her talents. Bassist Miles Mosley’s track “Abraham” was a standout. Fun fact: Kamasi Washington’s father performed in his band. Fun fact #2: I met Kamasi at the Nashville airport before the festival and he was a very nice dude. 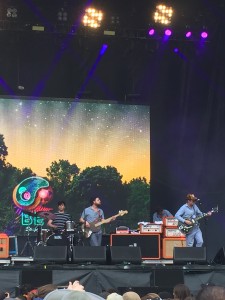 My Saturday began with the sweet harmonies of Dr. Dog. Their live set features three vocalists spreading the vocals fairly evenly, and all three voices were beautiful. Hits such as “Heart It Races,” “Lonesome,” and “The Truth” became sing-alongs. They had a sound that was simultaneously spacey and tight. For an hour, they owned that main stage. 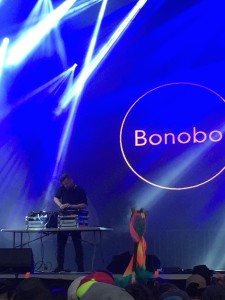 Bonobo’s DJ set was dark and groovy, perfect for his sunset time slot. The audience was dancing along to every beat. 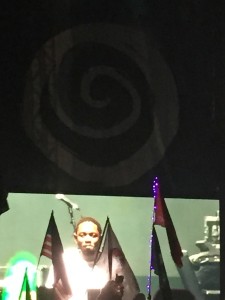 Kendrick Lamar is the God MC. He released his “untitled. unmastered.” mini-album only two nights before his Saturday show. However, he played mostly tracks off his records “To Pimp a Butterfly” and “good kid, M.A.A.D. city.” His live band gave new life to old hits such as “Swimming Pools” and “Money Trees.” His performance of “For Free? (Interlude)” was a feat of lyrical dexterity. One of the most emotional moments of the entire festival was when he brought a fan on stage and commended him on rapping along to his tracks with such conviction. Lamar turned this event into a way to encourage the crowd to take care of themselves mentally. Don’t worry Kendrick, your live set kept us all riding high for quite some time. I will never forget his closing performance of “Alright.” 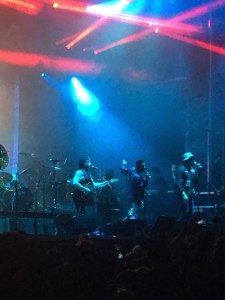 I was able to end my Okeechobee experience with a few David Bowie covers at the “Pow-wow.” It was only fitting that a tribute to the Starman ended my stay on the festival grounds, for Bowie would have approved of this environment.

The weather was perfect, the friends were friendly, and the tunes were groovy.