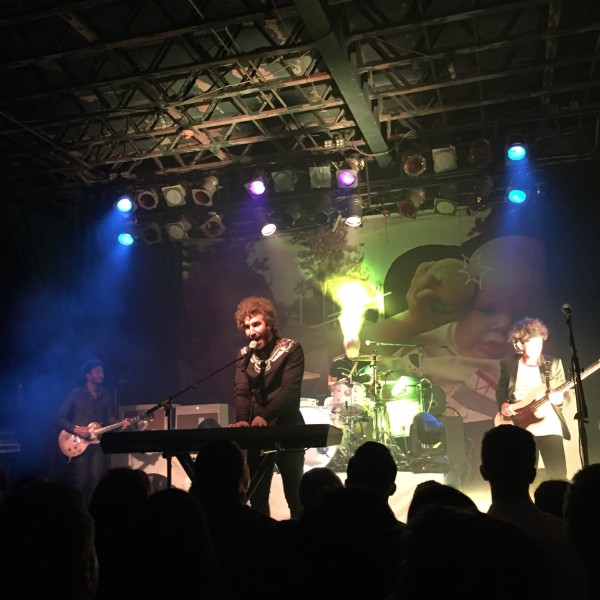 Last night Smallpools played Exit/In for the second time in the past six months, this time promoting their new album LOVETAP!

At 3pm yesterday, I turned in the final assignment of my college career. Partially to celebrate and partially to distract myself from the terror of facing the adult world, I headed over to Exit/In with my friend Sparling to see Smallpools rock the joint. My sister loves the band and had turned me on to their music, so making her jealous was another great reason to go to the show.

We arrived at 7:30 to find the half-full floor dominated by people without the over-21 hand stamps. Any illusion I had of being able to escape feeling old vanished immediately. Pitying the venue for what promised to be a slow night of alcohol sales, I grabbed a Shiner Bock and snagged a spot in the crowd just behind a couple of girls taking selfies. Naturally, Sparling and I photobombed as many as we could.

Around eight Vinyl Theatre, the first of the evening’s three acts, took the stage. The Milwaukee-based synth-rock foursome did its best to rile up the audience with a short set of highly energetic dance tunes—too energetic, I would argue. An opening act functions to amp up the crowd, yes, but it also needs to read the room and not force energy that simply isn’t there yet—and Exit/In at 8:00 pm was not drunk or excited enough for Vinyl Theatre’s animalism and intensity. Instead of adding dynamic force to the performance, the band’s antics merely distracted from their music and felt try-hardy, like a Nickelodeon band or like they learned their stage moves from Jack Black in School of Rock. On top of that, I didn’t find the music itself all too impressive. Vinyl Theatre’s set comprised of generic-sounding synth-pop—too many attempted sing-a-long “oh” melody lines that simply weren’t catchy enough to accomplish their goal, vapid lyrics, and the typical extra-percussionist moment where bands try to match Imagine Dragons but fall short. The songs blended together, nearly indistinguishable, bound together by singer Keegan Calmes’ nasally pop-punk voice that lacked power and sounded about eight years too late. While I wouldn’t say I hated the performance, it didn’t have many redeeming qualities. I was definitely in need of another Shiner Bock after their set. 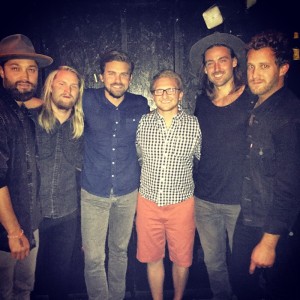 Grizfolk was the surprise success of the evening, and also turned out to be really friendly guys. Can you guess which two are Swedish?

Fortunately, Grizfolk made up for everything Vinyl Theatre lacked as an opening act. The five-piece from Los Angeles sounds like The Wild Feathers being kidnapped and forced to play dance-y music for hammered partygoers in Santa Monica but finding out they like it. You could almost call it Stockholm syndrome…which would make sense, since two members of Grizfolk are Swedish. It was hard to believe this was only the band’s second performance in Nashville. Everything about their set, from the flat-brimmed cowboy hats and subtly passionate stage presence to their pristine integration of Americana-style melody and lyrics with synthesizers, screamed Music City. The band mixed in tasteful vocal harmonies and didn’t overuse “oh” melodies, allowing for the sing-a-long moments to pack all the more punch when they came along. Lead singer Adam Roth’s clear voice had a gritty southern edge to it that befitted the lyrical content of a song like “Vagabonds,” which epitomizes Grizfolk’s electro-Americana-rock sound. As good as the band’s original songs were, the highlights of their set were the extended instrumental outros featuring wailing guitar solos over a tight-like-a-tiger rhythm section. I also got a kick out of their partial covers of Kendrick Lamar’s “Money Trees” and David Bowie’s “Suffragette City” (and definitely found myself wondering what percentage of the audience realized the latter was a cover). Overall, I can see why they released a live EP in 2014—their music translates super effectively to the stage, where they can mix in more of their rock influence to create a perfectly balanced show. I got the chance to talk to Grizfolk after the concert and repeatedly emphasized that they must record their first full-length album in Nashville. Producers here should be salivating over their sound, which fits in perfectly with the city’s indie rock scene. 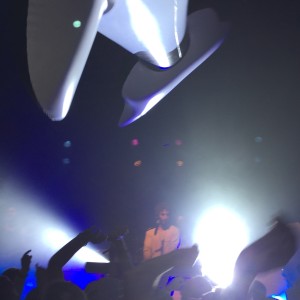 If you’re curious, that’s a huge inflatable killer whale pool toy at the top of the frame. Smallpools has a song called “Killer Whales,” by the way.

After one last beer (this time a Blue Moon, sadly without an orange) it was finally time for Smallpools. The room went dark and Vivaldi’s “La Primavera” blasted out over the PA system as the crowd—which had grown sizably—whistled and hooted in anticipation. Suddenly, a massive kick drum boomed out and a flash of white light illuminated singer Sean Scanlon conducting an imaginary orchestra from on high. As he jumped down to his keyboard, the audience roared in approval and the band launched into “Over and Over,” one of fifteen songs they would play over the next hour and fifteen minutes. Their sound combined the synthesizer chord-dominated riffs of Phoenix and the vocal stylings of Fun. with a dash of southern California sun tossed into the mix. Scanlon, who looks like the lovechild of Steve Carell and Bradley Cooper and sports a wild mane of hair, shifted easily from the lower ranges of his voice to the arching chorus melodies built for college girls to belt out at parties. The music itself featured an ideal blend of rock and catchy synth-pop that kept the crowd singing along and dancing the entire time (sometimes too emphatically—I was afraid one guy was going to knock me out with his octopus arms). Some highlights of the show included a middle-of-the-set drum solo (ballsy, but they made it work), Scanlon moving through the audience and treating everyone like an old friend while singing “Lovetap,” and the dueling glockspiel breakdown between Scanlon and bassist Joe Intile on “American Love.” Between songs, the band managed to keep the energy high even while Scanlon introduced songs with wild stories and guitarist Mike Kamerman injected with charming shoutouts. They made an unfamiliar audience feel like a crowd of their buddies at a house show in Los Angeles, a sentiment that will keep their fans coming back for more. And of course if they keep putting out songs like “Dreaming,” their biggest hit to date and the last song of the evening, that fan base will grow exponentially.

Overall, the night was lighthearted, fun, and danceable—a perfect way to blow off steam at the end of a semester. Smallpools was outstanding, but my biggest takeaway from the show was the tremendous potential of Grizfolk to combine Americana-rock and synth-pop and get huge because of it. And to cap off the evening, the Blackhawks defeated the Predators in triple overtime. Suffice it to say I was very happy when I went to bed with a weird mashup of “Dreaming” and “Chelsea Dagger” reverberating in my head.