If there are two things that we at WRVU care about more than music, they’re chicken wings and tortilla soup. Luckily, the guys in Portugal. The Man feel the same way. The band played a whomping 1-hour mega-medley on alumni lawn this weekend for Rites of Spring, stringing their potent original portfolio together with a series of covers, including but not limited to, It’s Always Sunny in Philadelphia’s “Day Man” and Oasis’s “Don’t Look Back in Anger.”

But before he and his band had Vanderbilt students singing about “the fighter of the night-man,” Portugal. The Man’s bassist and founding member, Zach Carothers, joined Heather Jackson, Meredith Mattlin, and myself inside WRVU studios to talk about his rap game, his stance on environmentalism, and most importantly his favorite places to eat.

Here’s an audio clip of our talk with Zach: 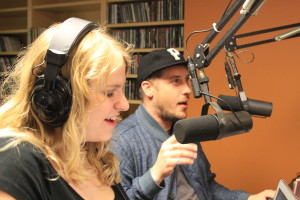 DJ, Heather Jackson, with Zach Carothers of Portugal. The Man inside WRVU

Additionally, check out this clip of Portugal. The Man covering “Day Man” as an intro to two of their own songs, “So American” and “People Say.”