I sat down in Fido one night to talk with two musicians whose names I couldn’t help but see across Instagram. Drea Gordon and Spencer Jordan (the rhyme is not lost on me) are regular names to see on writer’s rounds lineups, playing several nights a week at iconic musician hubs like Belcourt Taps, Live Oak, and Whiskey Jam. Watching the two joke with one another, you would think that they have been best friends for years. Despite only knowing one another for a couple of months, they have written numerous songs together and even started their own writer’s round together, Singles Night.

Both artists had inspired beginnings in music. Drea started in Seattle and did theater growing up, but had an early exposure to country music from her mom. She told me that she always wanted to be in entertainment, but didn’t know if the goal was Broadway (the New York one) or Broadway (the Nashville one). She mentioned how Taylor Swift had a large role in her eventual decision to become an artist, saying “I realized that I could speak up for myself through music, instead of just doing other people’s work.” 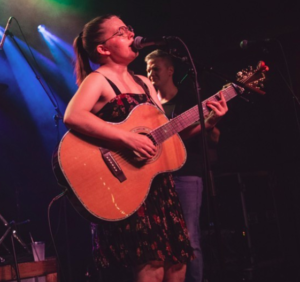 Spencer, from Jupiter, FL, took a more academic route, attending University of Florida before heading off to law school. Somewhere along that line, he realized that he was putting more of his time into his music than into school, and decided to take his efforts to Nashville. I asked if there was any specific moments when he knew that he wanted to be an artist, he told me the story of when he saw Jason Mraz in concert, turned to a friend and said, “I want to be on that stage.”

Upon moving to Nashville, both jumped in head-first. Spencer had friends from college who helped him to get connected and to start playing in rounds. From then, he was plugged into the community and playing every chance that he got. Drea had to get involved on her own a bit more, but once she started meeting others and playing rounds, she said that she knew she was home.

We talked awhile about the competition and the business side of being a musician in Nashville. Drea and Spencer were happy to talk about the taboo: with every writer’s round or every co-write, there is an agenda attached to it. Drea gave an example of a round she started early on, called the New in Town Special. “Of course I wanted to meet people and I wanted to share my music” she explained, “but it also made it so people had to reach out to me, they had to know my name if they wanted to play.” 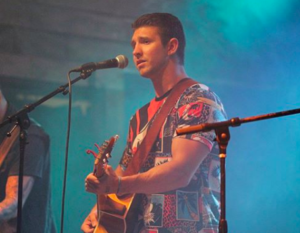 This put into words a concept that I understood but hadn’t really been able to express, and it’s completely true. I do these interviews to meet people and hear stories because I think that Nashville has incredibly interesting musicians who deserve the spotlight, but I also want to be a name on people’s minds when they need someone to fill a writer’s round slot, or they want somebody to play backup for them. As musicians, we make these decisions that are backed by passion, but that only gets you so far: sometimes you have to be smart and consider what’s going to help you get a step further than you are today.

And why are we so desperate to make these connections and get a foot in the door? Well, as Spencer put it, “I wasn’t a very popular kid in school, I didn’t really get invited to parties. Me, that kid, is everybody in Nashville. We all just want to be invited to the party. Those of us who host writer’s rounds are just hosting our own parties, to make sure that we’re invited.”

That’s how Singles Night came to be, a themed show created by this powerful duo to celebrate artists releasing new singles, including my first guest Stevie Rae Stephens. “Everyone deserves a party” Spencer told me, “sometimes you just have to throw it for them.” 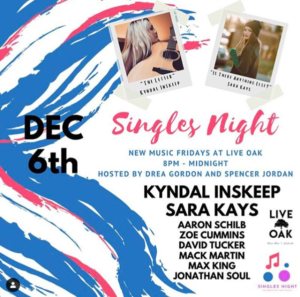 A sample lineup for “Singles Night”, courtesy of the round’s Instagram

Drea and Spencer both left me with some wise advice, the portion of these interviews that I’ve come to love the most. Drea talked patience, embracing the grind, and how “the moment you start expecting things to happen, you’re going to lose it.” Spencer told a story of how his friends back home used to ask, “When are you going to get a hit song? When can we tell that you’re really doing well?” “You learn that success is so relative” he said, “and you learn so much about yourself just by being here. So, yeah, maybe I don’t have a hit yet, but if I’m playing a show, no matter how big or small it is, and the people there are singing the words back to me, that’s all I need.”

Drea and Spencer are the perfect example of the community that Nashville offers its musicians. Two friends who have pushed one another to grow and to write their best songs yet, but who are also there for one another for a laugh, a cry, or anything in between. And of course, they’re there to throw one another a party when it’s needed.

You can find Drea on Instagram here and read more about her here.

Stream Spencer’s music here and find him on Instagram here.

Interested in Singles Night? You can learn more here.