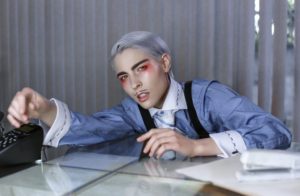 The genre-imploding mastermind discusses the ethos of coolness, signing pregnant bellies, and not being able to play the piano.

“They’re ready to see you now,” I’m told as I sit at the bar of Nashville’s “The East Room.” I’m at the venue with a friend — WRVU alumnus Keagan Chronister — on a warm Thursday night to interview hyperpop vanguard Dorian Electra before their show, which is one of many stops in the middle of a massive international tour. We peek behind the curtain of the green room to find Dorian applying their signature “Guyliner” into a handheld mirror. “Come in. I’m just doing my makeup” they say, “Tour life…”

Dorian is draped in a giant white dress shirt and boasts hair dyed an exuberant blue (a look which should not come as a surprise to any of the artist’s fans). Dorian has firmly established themselves as an artist more-than-willing to embrace the queer, campy aesthetic of Hyperpop — a genre which fuses pop, electronic, juke, trap, and pretty much everything else imaginable to create a maximalist, hyper-stylized approach to popular music. (See PC Music for more).

Dorian’s gender-fluidity echoes all throughout their music. The debut album, Flamboyant, sounds more androgynous, with Dorian pitching down their voice and adding a gaudy layer of autotune to assume a gruff, inhuman timbre. It’s strange at first hearing their voice unaffected in person, but our conversation is wonderful. Check out what the “Musical Genius” has to say:

Hey Dorian, thanks for talking with me tonight. How’s the tour going?

The tour is going great — I’m playing cities I’ve never played. Like, I’ve never been to Nashville before. We just got back from two NYC shows back to back and Washington DC shows. I’m happy to be back in the south. I’m from Houston, Texas, so this is familiar. But I live in LA now.

I’ve loved seeing all the people. In NYC, kids were there with their parents. There were couples. I also got to sign a pregnant belly in DC. Shit was crazy.

Going to the bathroom. Always. It’s an anxiety-related thing. Drinking lots of water. I don’t stretch but I should.

How did you meet these other bands on tour?

Mood Killer is with me for this whole US tour. We met in Chicago during school, actually. Superbody, on the other hand, I met over Instagram. We’ve played several shows together, like an afterparty for Charli XCX in Atlanta. Last time I was there, I actually recorded a song with Diveo, and we’re going to be performing tonight for the first time ever. I’ve also got a special song just for Nashville.

How has the success of this album changed your career?

It’s been absolutely game-changing. Having a full body of work out there lets people see what I’m all about as an artist. It opens so many doors. Like… I can’t believe The Needle Drop reviewed my album.

And reviewed it very well.

Yeah, I was freaking the fuck out — wait, can I say that? I can? Cool. Sorry, my ADD is so horrible. (Note: Electra is actually clinically diagnosed with attention deficit disorder). I’m fucked up on no sleep right now. My brain works so that I can literally hear everything going on in the room. ADD can be valuable in a lot of cases… but not right now. Anyways, lots more people have found my music now.

It’s a HUGE moment. I put it out completely independently. I knew that I couldn’t wait around and pitch it to people or wait for it to be “discovered.” Honestly, people take you more seriously as an artist when you have a full-length album out. People tell me all the time they wish they had dropped theirs earlier — they feel like the hype will keep building and building and building but it often doesn’t unless you release a full body of work.

Is an album necessary for success these days?

Even though the music industry is moving away from the standard album format, it still largely operates in that way. It’s also cool to have a full body of work to tour with.

What have you been listening to recently that influenced this album or your work in the future?

I guess some stoner metal bands; Electric Wizard is one of my favorites in that genre — it’s got heavy guitars, and it’s kinda influenced by psychedelic sixties music too. I like anything that’s really dark in themes, aesthetic, and sound. Anything ancient or medieval. And then also baroque music is something I grew up listening to. My mom had this store where she sold handmade jewelry, and in the store she only played baroque music. And I’m not talking classical music or opera. You would not catch my mom, Paula Friedkin, with some motherfucking romantic classical. It was only baroque.

We also listened to a bunch of Gregorian monk chants, which sounds like this: (Dorian proceeds to chant). My mother used to have bad anxiety, so when she drove us to school that was the only thing she’d let us listen to. That, some Bowie, and these two Beck albums I was obsessed with. I always loved Gregorian chants as a kid, but now I’m a fucking stan.

Has that Influenced your sound at all?

Oh, it has totally influenced my sound. At first probably subconscious and now it’s fully conscious. I like to fuse things from a bunch of different genres. I obviously have influences of electronic music and even some dubstep moments in certain songs. I love the idea of playing with genre, especially in a self-aware way. That idea is very outdated anyways. I mean, who cares about doing something in a genre?

I love music that’s very unpretentious — something that says “I’m stupid but also a genius” at the same time. I’m a complete clown. Total idiot. I know literally nothing about music, and I cannot read one fucking note.

Keagan: But you played the piano in the Flamboyant video!

Oh my god, the funniest thing is: My partner Weston Allen (who’s here tonight working lights) was co-directing the video with me and he told me “You should probably practice before we shoot this.” And I said, “I’m fine. I know how it goes,” but then I got there to shoot and I just lost it — my thumb started hitting three keys at once and it looked so bad.

He spent hours editing it to make it look good. People tell me all the time that it looks good, but in reality, it was all Weston.

So you don’t play at all?

No, no. I tried to take lessons once but I just couldn’t last for that. I don’t have the patience I don’t think.

Is there anyone you want to work with in the future?

Oh, there’s so many. One person I really love is Tierra Whack. She’s got that same energy of doing something so stupid and rediculous-sounding, but it’s so cool. It’s because a person is doing something so confidently and being their goofy ass selves. People love confidence. I think a lot of people spend their time trying to do something that other people already think is cool, which is so boring. The most interesting people are the ones doing something that borderline ridiculous.

Same with 100 gecs. Same ethos. GFOTY, Mood Killer, all these people have that too. My favorite artists are the ones that are super theatrical, over the top, and not afraid to be ridiculous. There’s a lot of artists who seem dark, mysterious, and cool, but they’ve never been that interesting to me.  I want to see some some-awareness and playfulness. At the end of the day, that’s bolder. There’s obviously a line though, or else you run the risk of being a theater kid. Nothing against theater kids, by the way, I did musical theater for many years!

It’s uncool when you stop being self-aware. As long as you maintain some self-awareness and make fun of yourself, that’s what coolness is to me.

Keagan: Who do you work with on your music videos?

Me, Mood Killer, and Weston Allen always work together on video projects. It’s very DIY, but we try to make them look as expensive as possible. My background is in film.

What do you mean when you say your background is in film?

I professionally made educational videos and music videos for companies and other artists before my music took off financially. But that’s not what I studied in school — I studied philosophy and history of science. The videos are just what I did for a living after school.

Who’s your favorite artist you’ve worked with so far?

Probably Dylan Brady. I’m not even low-key obsessed, I’m high-key obsessed. He’s incredibly prolific; he works extremely fast with so many artists and styles. When we first worked together we made “Live by the Sword” and it made it on the album.

“Musical Genius” came about in a similar way; I just told him “Let’s have a song that’s a zillion different genres in one,” and he just made it and it was fucking perfect. We started riffing and it worked. I found the original voice memo from Las Vegas recently

Keagan: You mentioned on Twitter that song was really difficult.

Yeah, it’s a difficult song to sing because I don’t use any effects in my live show. It’s fun trying to match the ridiculous autotune that’s on the album. I have to affect my voice a lot to match the production. It’s a fun way to get better as a singer and control my voice.

Alright Dorian, the show is starting soon so we need to wrap up with a final question. What are you most excited about as you finish the tour?

I’m excited to play smaller cities where there may not be a big queer community. Like, I’m from Houston and even though it’s the fourth largest city in the country, the queer community there is still small. I want to help bring people together.

Special thanks to Keagan Chronister for help with this interview.