As any good interviewer does, I rolled out of bed and put my slippers on five minutes before sitting down at my desk and getting set up for the phone call. However, this felt fitting when speaking to Megan Barker, the queen and creator of Nashville’s comfiest writer’s round, Jammin’ In Jammies. From the honky-tonks to The Bluebird, Megan has done it all.

Megan Barker is the child of two incredible musicians. Her mother toured the country, playing guitar and singing background. Her father is none other than Bobby P. Barker, who wrote songs for iconic country artists like Hank Williams Jr., Ronnie Milsap, and Doug Stone. Logically, Megan took to music as a result. After moving to Vegas, she discovered her passion for country music via John Mayer and Keith Urban. From then, she began learning guitar and singing. As her confidence and skills grew, she began to slowly climb the ladder, moving from open mics, to opening for headline shows, to playing for hours at a time on the Vegas strip and hosting her own shows. When I asked her if she was considering music as a career at this point, I was met with a resounding “of course!” She continued, “I had one of those ‘What do you want to be when you grow up?’ books when I was younger and the answer was always ‘country singer.'” 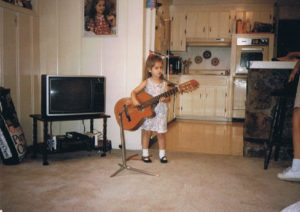 Megan Barker playing guitar as a child, courtesy of meganbarker.com

As years passed, Megan bounced back and forth between Nashville and Vegas. “Eventually, I realized I had to just stay [in Nashville],” she explained, “I was trying to make things happen but people kept telling me, ‘Call me when you get [to Nashville]. And I was making money on the strip but I wanted more than that. I realized that there’s no substitute for being here everyday.” This sentence echoes one of the first things that I noticed upon moving here. There is no way to truly explain the amount of talent in Nashville or how there is “music on every corner” without experiencing it for yourself.

And so, Megan anchored herself in Nashville, in what came to be a “second beginning” for her musical career. When speaking on the experience of getting her foot in the Nashville door, she focused on the kindness of strangers as the real mechanism for moving up in this city. One specific example was meeting a friend who landed her a time slot at Gibson’s Cafe in the Nashville Airport.

We had spent the majority of the conversation thus far speaking about Megan’s experience on the Vegas strip and on Broadway, so I took a step back and asked her about her writing process and when she became an artist along with already being a performer. She said that she had been writing songs as long as she’d been a performer, but gave more focus to that side of her upon moving to Nashville. She elaborated, “I had this mental checklist of places that I wanted to play, like The Bluebird, Whiskey Jam; I wanted to be part of the official CMA Fest Lineup, and I did all of that.” Along with breaking into the scene of performing her original music, Megan still performs on Broadway and around town multiple nights a week. She described the balance as “write during the day, play those songs at night.”

When focusing on writer’s rounds specifically, Megan admitted that it was a difficult adjustment. “I’m an introvert, but I still wanted to go out and play every night because that was obviously the best way to meet people.” Again, Megan speaks my mind. At times, making small talk with other artists in our rounds can be awkward, emotionally draining, and seem like the worst thing in the world. Yet, it’s a necessity as the power of networking is regularly emphasized within the industry.

As a way to go out and meet people while staying comfortable and casual, Jammin’ In Jammies was created, or born rather. The round has jumped around from different venues, starting at the Old Line (now closed), then moving to Frisky Frog’s (now Live Oak), and finally NashHouse Saloon, its current residence. As the title suggests, performers have to follow a strict dress code: jammies. Having attended the round, I can attest that the atmosphere matches the dress; the performers are bubbly and friendly, the songs catchy and lighthearted (most of the time, Nashville was built on breakup songs.) 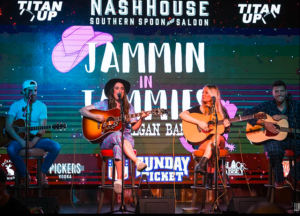 Jammin’ In Jammies Writers Round at NashHouse Saloon, courtesy of jammininjammies.com

Jammin’ In Jammies is the perfect representation of who Megan Barker is, and the kind of conversation that we had together. Her personality demonstrates a “one of us” mentality, with Instagram stories of her admiring her cats or sitting in a pile of unfolded laundry: incredibly relatable content, so to speak. I gave Megan the opportunity to give a last piece of advice and she left me with this: “If anybody’s reading this and is feeling overwhelmed by Nashville, don’t be intimidated. It’s all about the music at the end of the day, don’t let the business of the industry or the focus on social media get in the way of that.”

Just as Stevie Rae left me with a redefined notion of success last week, speaking to Megan helped me refocus on what matters most, and why I came here. While I’m always considering ways that I can further my career outside of music, I neglected the burnout that can be associated with that constant worry. So for now, I’ll be focusing on playing the songs that I enjoy and not letting all of the fluff get in the way.

You can read more about Megan Barker, listen to her music, and find her socials here.