As you may already be aware, homecoming was just this past weekend. All week, our campus has been inundated with alumni of all ages coming back to relive their Vanderbilt experiences. So as we wrap up the weekend, here’s a homecoming soundtrack to put the weekend into perspective. Some of these graduates lived through some really great years of music (and WRVU). So without further ado, I present to you: the hits of homecoming. 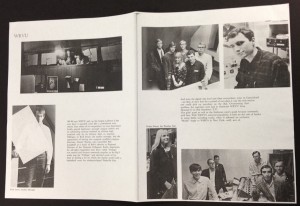 (WRVU’s page in the yearbook for the class of 1969. Can you believe we’ve been around almost fifty years?)

Since the class of 2004 is one of the younger classes celebrating their reunion this year, some of us may remember the number one song of 2004: Yeah! by Usher featuring Lil Jon and Ludacris. To be quite honest however, I really wish I didn’t. Unfortunately, it appears to just be one of those songs that will be seared into my brain forever.

The class of 1999 takes us in a different direction. While 2004 was into Usher, 1999 seemed to be more fond of Cher. Some of you may be familiar with her role in the 2010 movie Burlesque, but before that she did have a normal singing career, albeit not the one her character had. According to the Billboard Year-End Hot 100 of 1999, the top song of the year was Cher’s Believe. Cher’s powerhouse vocals combined with the basic disco-eque beats in the background are a winning combination, and its status as the year’s number one hit shows that someone else in 1999 agreed with me.

Now, 1994 predates some of us. Consequently, I wasn’t sure how prominent this next song would have been in our lives. However, thanks to the hit movie Pitch Perfect, I think I can safely say that a number of our readers even in the younger demographics are at least vaguely familiar with this next hit. The Barden Bellas covered this song in their snooze-worthy set at the beginning of the movie. 1994’s top hit was The Sign by Ace of Base.

As we move out of the more recent decades, I’m sure some of these songs will be unfamiliar to our readers. So from here on out, I strongly advocate giving these songs a listen. Odds are you may not be familiar with them, but remember, they were hits for a reason. 1989 was the year of many hits you may be familiar with. Bette Midler’s ‘Wind Beneath My Wings’ came out that year, as did Poison’s ‘Every Rose Has Its Thorn’. However, the top slot of 1989 goes to Chicago’s ‘Look Away’.

So when I was first looking up the top song of 1984, I wasn’t quite sure I knew this one. Although my recent binge watching of the show New Girl had reminded me that Prince exists, I could not have named any songs of his off the top of my head. However, as it turns out, I am very familiar with this particular song of Prince’s. In 1984, the top song was Prince’s When Doves Cry. Take a listen, I bet you’ve heard it before.

1979 was the year of Y.M.C.A. Surprisingly enough, however, that was not the top song of the year. Go figure. Instead, that honor went to My Sharona by The Knack.

This next song spins us 180 degrees in terms of style. While the years of 1984 and 1979 were characterized by rock music, the top song of 1974 takes us in a more sedate direction. Barbra Streisand is this year’s top artist, with her pop ballad The Way We Were.

The class of 1969 can lay claim to a very unusual distinction. Their top hit is attributed to a set of fictional characters. If any of you readers are familiar with the Archie comics, this year’s top hit, Sugar Sugar is attributed to Archie and friends. Apparently The Monkees were originally offered the tune, but they decided to turn it down. It kind of makes you wonder what the song would have sounded like instead.

The class of 1964 concludes this homecoming countdown. This year, the class of 1964 celebrated their 50th reunion, an achievement that allows them to join the ranks of the quinqs, a silly word that simply means you have passed your fiftieth reunion. 1964 takes us back to the time of the Beatles, and they are in fact the artist behind this year’s hit song: I Want to Hold Your Hand.

So as our alumni slowly leave Nashville, take a moment to appreciate the amount of history they take with them. Whether or not you are aware of the historical impact of those years, these years were unquestionably formative ones in the history of music. Just wait until our reunions. Who knows what kind of music our legacy will bring?