The War on Drugs @ Marathon

Despite severe weather warnings, on Monday I and a healthy crowd of Nashvillians head over to Marathon Music Works for The War on Drugs’ exclusive brand of heartland rock. Attendees sport beards, boots, flannel, and, many of them, years of life experience. I’m pretty sure this is the same multigenerational group that showed up in place of Vanderbilt students when Quake accidentally booked My Morning Jacket several years ago.

During their 14-song set, The War on Drugs makes it plain that they are a guitar band. Frontman Adam Granduciel is brought a different guitar before each song, and he goes into extended soloing throughout the night. The sound is straightforward and expansive, and upbeat numbers like “Red Eyes” have fans swaying and bobbing their heads. Two young lumberjack types in my vicinity start up an air guitar band. 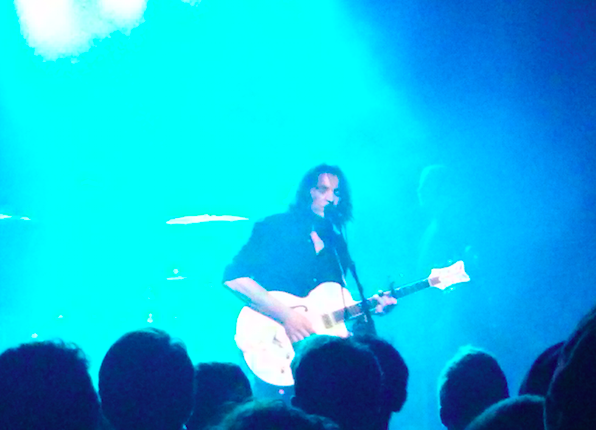 Adam Granduciel in the Spotlight for “Suffering”

The remaining instruments play a supporting role. The other band members are a keyboardist, rhythm guitarist, bassist, drummer, and a baritone sax player. At first glance the sax player stands out because of his instrument, but quickly he’s revealed to be a subtle part of the band’s atmosphere instead of a gimmick. The sax never takes the lead, but instead layers into the densely mixed structure. Excluding Granduciel’s harmonica outros and on-the-prairie ballads like “Suffering” and “Lost in the Dream”, War on Drugs could pass respectably as a shoegaze outfit. Though tracks like “An Ocean in Between the Waves” and “Under the Pressure” exceed seven and nine minutes, respectively, the band plays hard throughout.

In the live setting at Marathon the music develops a natural and full quality, and the sound clearly envelops the area. As a relatively new venue, Marathon Music Works strikes an impressive balance between friendly rusticity and a modern sheen. Granted, the former quality can partly be attributed to the style of music of the night since electronic bands I’ve seen here before (Beach House, Passion Pit) had me mostly thinking about the second part. Either way, the versatile atmosphere and open layout makes Marathon an excellent addition to the Nashville scene. The War on Drugs certainly fit right in, and I’d be excited to see them back in this space in the future.

Check out War on Drugs’ great 2014 release, Lost in the Dream: