Her daddy had enough so she put her back into it. She’s is a powerhouse. She’s an unending geyser of consistency. Merrill Garbus knows how to put on a fantastic show. On Thursday the 9th at Marathon Music Works, music fans got their money’s worth. 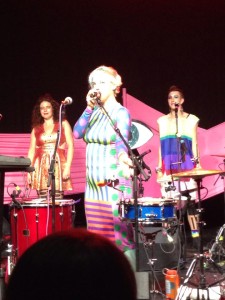 A Tune-yards show has the vibrancy and constant stimulation of a Wiggles show. Maybe not exactly the Wiggles but I’ll stick to my guns about comparing their stage presence to children’s entertainment. Not because their performance is anything subpar or simplistic but because they have a comforting, celebratory act. There’s no excessive use of smoke machines, mechanics, or expensive decor; the excitement of a Tune-yards show is based on color, dance, and emotion.

The opening act, James Tillman, was a little bit of a downer. Not that he wasn’t talented, he had an incredible falsetto and beautiful guitar playing skills; but when you’re anticipating the merriment of Tune-yards’ percussion and strong vocal presence, to listen to someone play the same few chords with a flighty falsetto for an hour was hardly appealing. His sound was a lot like King Krule’s, with deep, repetitive rhythms but differentiated itself with James’ higher-pitched vocals. James Tillman made the perfect music for looking out the window of an airplane in the rain or going on a walk with headphones on, but not the perfect music for an invigorating live performance. The highlight of show was his cover of Lana Del Ray’s Video Games where you could visibly see the audience look up from their phones, begin to bob their heads, and lend the stage their attention once again. I will say that his opening song, Shangri La, was wickedly good. 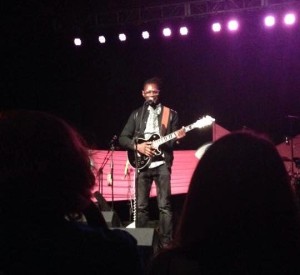 Maybe the contrast between the sleepiness of James Tillman’s style and the liveliness of Tune-Yards’ opening songs helped to create some of the magic.

Merrill and the rest of the Tune-yards clan came onto the stage with incredible energy. The back-up vocalists were also fantastic entertainers, with synchronized dance moves and extreme expressiveness. Everyone on stage wore colorful outfits and face paint but, even so, the show was more about fusing music and visual art than it was a distraction. With Tune-yards, the music is the focal point and for a long time I’ve been of the opinion that Tune-yards is the most compelling thing coming out of the music industry in the past decade or so.

On top of musical genius and visual entertainment, Tune-yards had the stage presence and charisma of a champion. Surprising the audience with a donation to water-related charity from a portion of our tickets, Tune-yards was an all around feel-good experience. 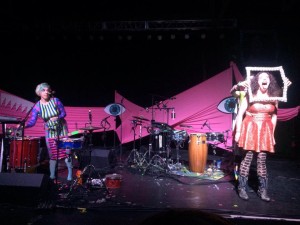