Recently, the Travel and Leisure Magazine came out with rankings of America’s favorite cities and lo and behold, Nashville was listed number 1 for concerts, the music scene, and also as the friendliest city around. Even only after a year of living here, I wholeheartedly agree that this is the place for music and entertainment. For those of you who are a bit skeptical, I’ve compiled a list of reasons that this ranking is well-deserved.

1. Honky-tonks
I had never heard this term nor seen one in real life before coming to Nashville, but they are truly an icon of the city and its culture. A honky-tonk is a bar that plays primarily country music. While in itself this is not a new concept, there is a strip of honky-tonks on Broadway, the tourist hub of Nashville, that is quite a sight to see. At almost any time day or night, aspiring country musicians will be on the streets and in the bars trying to make their next big break. The atmosphere is riveting and contagious, with famous honky-tonks such as Tootsies and Wildhorse Saloon having been here for decades entertaining thousands of people a year.

The concentration of music venues in this town is outstanding. In fact, I am a closer walk to the Exit/In than some of my classes. I could spend an entire post and then some talking about the best venues. Some of my favorites include Exit/In, Marathon Music Works, and the Ryman Auditorium. Each of them have their own unique history and vibe, but have all been home to spectacular performances. As a college student without access to a car, the proximity of the venues as well as the frequency at which I find myself buying tickets to huge names in the music world are a blessing and is another reason I am glad I chose Nashville as my home for four years. 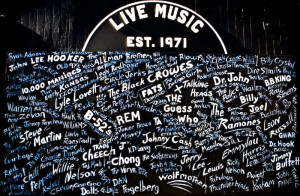 Downtown Nashville is not only home to the musicians and their audience, but also the businesses that help those musicians thrive. Only a few minutes away from the honky-tonks and other venues are historical recording sites such as RCA’s Studio B where greats such as Chet Atkins, The Everly Brothers, and the Strokes have recorded.  Other recent artists who have recorded on Music Row include Taylor Swift and The Black Keys, who have made their mark on this legendary group of recording studios.

At Vanderbilt, the opportunity to pursue music is made possible through the Blair School of music. Nearly every weekend there is a performance through the symphony or performing arts that the school puts on and they have blown my mind on several occasions. At Belmont University, students there are known for their affinity to music in an array of genres and many have recorded in studios on Music Row. Sometimes their records are played on WRVU’s station so watch out for them! I’ve also noticed the talent of Lipscomb students, who have come to spoken word performances and other talent shows with original songs and poetry.

The first big festival that comes to mind is Live on the Green. For a few weeks in August, one Thursday a week is dedicated to a huge free event at Public Square Park with amazing headliners and local bands, not to mention a plethora of food trucks, too. The fact that the city can pull off a show like this and offer it to the general public for free is absolutely incredible. Another free concert series that comes to mind is Musician’s Corner at Centennial Park, which is hosted on Saturdays for a few weeks in September and October, where local artists perform in a more relaxed setting. It is a wonderful family event that also tends to coincide with other cultural events in the park such as the Nashville Craft Fair or Nashville Cultural Fair. For those more interested in EDM, Rites of Spring at Vanderbilt is a two-day festival in April that is a favorite of the students and general public alike.