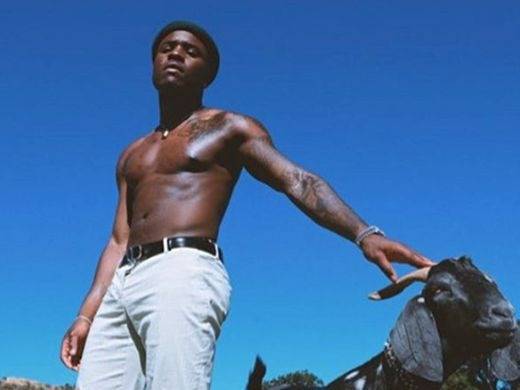 Is He Real? is the latest project by Maryland rapper IDK. In this project, he takes a departure from the dark subject matter and more aggressive style of rapping on previous projects like IWASVERYBAD. On this album, IDK discusses his relationship with spirituality.

As the title of the album suggests, a central theme to the album is IDK’s internal struggle with religion and spirituality. The intro track, “Cloud Blu”, sets a kind of edgy tone to the start of the album. The track is a skit in which IDK is asking a child what he thinks happens when we die. The child describes a whole fantasy of going to heaven and seeing his idols, but at the end abruptly and angrily says that none of it will happen because God isn’t real. While the intro track sounds like a complete rejection of God, throughout the album IDK seems to change his mind after reflecting on his life, family, and friends. Toward the end, on the track “European Skies”, IDK sounds more frustrated with his pastor and the contradictions in the teachings of Christianity than being in complete denial of the existence of God. By the end, the resolution of the question Is he Real? is just a resounding “meh” as IDK doesn’t really come to a definite answer to his dilemma. Then again, that could be what the track “I Do Me… You Do You” is getting at with Tyler, the Creator featuring to weigh in on the situation. When asked in the song whether he believes in a higher power, Tyler responds by saying “something had to come up with all this”, but he believes “God is in everybody”. Ultimately it is up to the audience’s interpretation, but to me it seems the underlying message is to look inward to find something you legitimately want to believe in.

There are points on the album where IDK tackles social issues in a musically and lyrically interesting way, such as on the song “No Cable”, where IDK comments on the public’s tendency to simply “change the channel” in the face of tragedy and crime. However, songs like “Digital”, an entertaining but ultimately generic track, struggle to find a spot thematically on the album. Ultimately, one of the biggest problems with the album is that there are not enough memorable tracks on it. With the album being only 14 songs and 3-4 of them being skits/spoken word tracks, the album seems to largely prioritize theme over sound. This doesn’t mean it’s impossible to excel in both aspects, but the album left me craving more of the unique production on songs like, “December”, “Alone”, and “No Cable”. The spoken word bits fit fine within the sound and context of the album, but take up too much time that could have been used on more tracks.

The production is definitely a high point for the album, with such a diverse blend of sounds across multiple genres being displayed on the project. Each song blends seamlessly into the next making the album extremely cohesive even between songs of entirely different genres. Overall, Is He Real? is an enjoyable listen even if IDK can sound preachy at times.