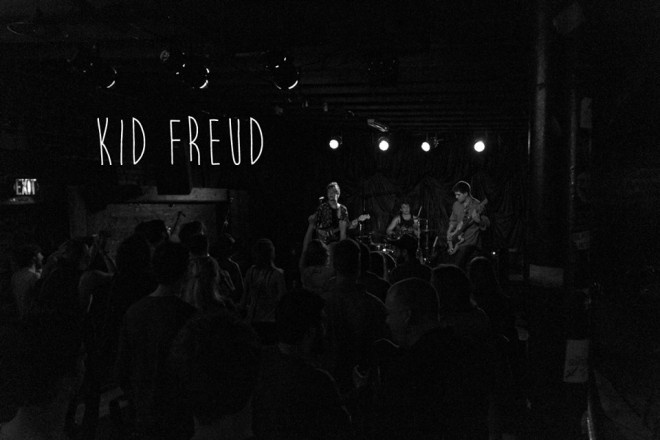 Kid Freud, formed five months ago, is poised for a successful 2014-2015 campaign.

It’s rare that you find a prodigious band coming out of Vanderbilt.  Vampire Weekend met at Columbia and Tom Schulz met his Boston bandmates at MIT, but here the music scene centers around singer-songwriters—Belmont produces the bands, they say.

With Kid Freud, though, Vanderbilt may have these rock titans’ future equals on its hands.

Despite forming only four months ago, the three-piece outfit is taking its place at the head of the burgeoning music community on West End, regularly packing venues like The End and fresh off earning the opportunity to open Rites of Spring after winning the festival’s Battle of the Bands.

“It’s amazing how quickly Kid Freud has picked up,” says Daniel Closser, the band’s drummer and the driving force on its business side.  “I’ve been involved in several other projects in the past and this is the first one where I’ve been at this level of excitement.  I think we’re capable of some big things.”

Indeed, Kid Freud has already accomplished a great deal in four months of existence.  They’ve written approximately ten originals, three of which can be found on the band’s Soundcloud page.  The most popular, “Boston,” is over one thousand plays and combines a Vampire Weekend-inspired, cheerful verse melody with a powerful and anthemic chorus reminiscent of Absolution-era Muse—it will have you singing along by the second listen.  “Reptiles” and “Sticky Lips” are also well worth your time, the former layering a sensuous hook and some old-fashioned garage band riffs over the steady propellant of the bass and drums.

Though the recordings on Kid Freud’s demo are solid, however, you need to see the band live—or interview them—to truly appreciate their chemistry between its three members, each of whom plays a vital but unique role in Kid Freud’s electrifying performance dynamic.  It all starts with Alex Tomkins, the band’s singer and guitarist, whose personality combines the sex-drugs-rock n’ roll aesthetic with enough quirky charisma to make him stand out.

“He’s basically a living cartoon character,” Closser tells me as I sit with the band in the Vanderbilt dining hall.  “Everything that comes out of his mouth…they don’t seem to come from human sentiments.”

Tomkins grins and says, “I don’t know where it comes from.”  He then decides to tell the table behind us that this is a library and that they should quiet down.  Everyone laughs; you can’t help but like Tomkins. 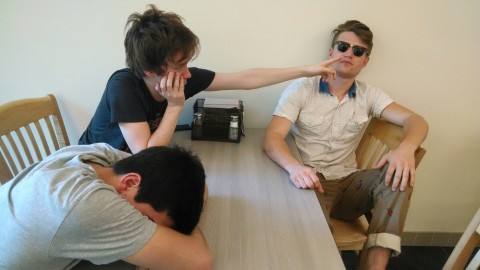 Kid Freud traces its roots to a fortuitous meeting between Tomkins and Closser over a year ago.

“I met Alex drunk at a Wilskills party,” says Closser.

“Yeah, I definitely should have gone home with Daniel that night, and not [redacted],” Tomkins adds.  Again, everyone laughs.

Within days, the two were playing open mics together, but things didn’t really accelerate until they found Jacob Moore, Kid Freud’s bassist and indisputably the reserved one of the group, the steady line anchoring Closser’s frenetic energy and Tomkins’ soft-spoken roguishness.

“The first practice, they had me on my toes,” Moore admits.  “The second one, I pretty much knew what was going on.”  This rapid assimilation into the band was made more impressive by the fact that until joining Kid Freud, Moore hadn’t played much bass—he is a guitarist by trade.

“It’s really impressive how quickly Jacob has become such an important contributor to the band,” says Closser.  “We’re at the point where he’s writing his own bass lines and coming up with some really cool stuff.”

Because of these well-defined roles and the chemistry between the members, Kid Freud plays an incredibly strong live show; as Closser puts it, they knew they had something special when “there weren’t a lot of people outside smoking cigarettes” during their first show at The End.  All of those people, rather, were crowding up to the stage, dancing to the band’s catchy rock and getting caught in the whirlwind of frontman that is Alex Tomkins.  A self-described “mic fiend,” he dominates the stage with his smooth vocals and vicious guitar riffing, but it’s his offbeat humor and volatile charisma—and his British accent—that sets him apart as a frontman.  Whether he’s leaning back and shredding the breakdown on “Reptiles,” inducing sighs from the ladies in the crowd as he sings “I want to make your boyfriend cry” on “Downtown,” or sipping a beer and cracking a joke between songs, he is an eye magnet at all times.  Moore, meanwhile, holds down the fort with the steady thrumming of his fingers on the bass and a smile on his face, while Closser bobs up and down behind the drum kit, driving the songs forward from the back of the stage. 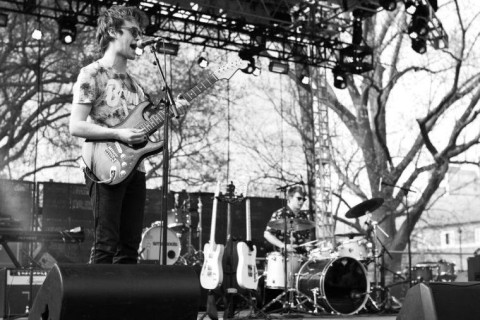 One of the highlights of Kid Freud’s career thus far has been their opening set at Rites of Spring.

The energy of these live shows is a primary reason for the band’s success thus far.  It’s won them new fans at every show and helped them overcome acts that brought more supporters to the Battle of the Bands.  But Kid Freud isn’t resting on their laurels, and will spend the summer trying to craft a distinctive new sound to show off when it begins playing shows in earnest in the fall.  Being described as a cross between The Strokes and Vampire Weekend isn’t bad for beginners, but the band wants to sound like Kid Freud, not Vampire Weekend.

“One of the reasons we sound like Vampire Weekend, especially on Boston, is just because of the classical, happy melodies,” says Tomkins.  “And the reason we sound like The Strokes is just the way I play guitar.  We need to get more creative with what we’re doing…maintain the simplicity and happy vibes, but finding that texture that sets us apart from other bands.”

Closser nods in agreement.  “This summer we want to develop something that fully represents our sound,” he explains.  “We’re already confident in the live portion, but we need something more to display.”

In light of these goals, and also because Moore will be interning at ExxonMobil this summer, Kid Freud will be spending the next three months mainly in the studio, looking to develop into an entity that will take Vanderbilt and Nashville by storm in the fall.  If they can discover that magic sound and transform it into recordings that match the energy of their live performances, they’ll be inspiring dominance of the id at shows all over the city and the state by the end of 2015.  And Vanderbilt will finally have a rock band that can stand up to the rest of the Nashville music world.