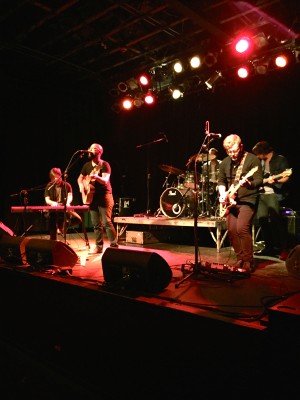 Exit/In is one of Nashville’s most famous and beloved venues.  One look above the bar at the wall of artists who have performed on its stage is enough to send the tingles of history down your spine.  Monday night, though, Exit/In’s legendary stage was devoted to three local acts: Joel Levi, James and the Wild Spirit, and Vanderbilt’s own Kid Freud.  The trio of bands, though quite different in genre and style, combined to put on one hell of a show.

Kid Freud played first, and at first seemed a bit jittery; this was undoubtedly the most prestigious venue the young power three-piece has played.  But after the first couple of songs, they were firing on all cylinders, pumping out feedback-laden, booming garage rock topped with infectious melodies.  Though Kid Freud was the opening act, they brought a ton of energy to the set and masterfully engaged the crowd in the music. 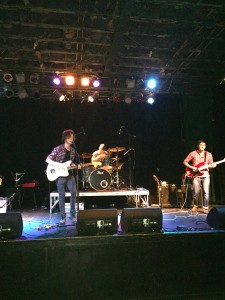 Kid Freud opened the show with a ton of energy and a garage pop vibe.

Frontman Alex Tomkins’ goofy charm kept all eyes on him, whether or not the music was flowing.  He contributed one of the highlights of the set with his solo performance of “Cold Feet (Stormy Weather)” near the end of the set; the crowd fell silent under the rapture of Tomkins’ earnest yet playful melody and the accompanying gently strummed guitar chords.  The other two members of the band, for their part, were fantastic in their roles; bassist Jacob Moore and drummer Daniel Closser are fun to watch together and have developed some nice chemistry on stage.  Overall, Kid Freud showed that they can hold their own playing alongside more prominent local acts, and the last four or five songs of their set were nearly flawless, both musically and stylistically.

Next up was James and the Wild Spirit, a rollicking Western-type rock band whose songs made me want to sit astride my stallion and gallop off into the sunset.  That being said, there was enough pop-rock influence to make some of their set quite dance-y, particularly on their song “Nothing In My Way.”  James is a capable frontman and vocalist who isn’t afraid to hit the high notes; though his natural charisma isn’t that of Alex Tomkins, he strummed his retro-Western acoustic guitar powerfully and bantered with the crowd between songs to keep everyone engaged. 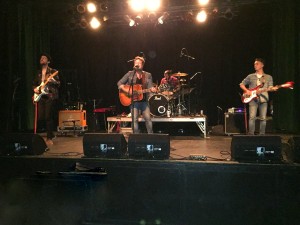 James and the Wild Spirit packed a Western-infused punch.

The highlight of James and the Wild Spirit’s performance, however, was the extended jams with which they would end each song.  The skill of each of the four musicians is apparent and it’s equally clear that this outfit has been playing together for quite some time–they understand each other on stage and bring unbridled enthusiasm to this aspect of the performance.  The one time things were toned down was when James played his own solo song, “Constant Line,” which had a country feel to it.  In sum, James and the Wild Spirit impressed, and set the stage well for the evening’s headliner.

Joel Levi took the stage around 10:45 PM and Exit/In was immediately immersed in a wall of sound.  The atmosphere was established by the band’s solid rhythm section and the ambience of arching chords played on an organ, bathing the melodies in a clean modern-rock sheen.  Joel Levi himself has a gentle voice that floated atop this sonic sea and was joined at times by crisp harmonies sung by the lead guitarist and organist.  The band’s style reminded me of the Wild Feathers in that the music had tangible country and Americana influences but still laid very much in the realm of rock music, with the rock aspect emanating from the skilled lead guitarist’s riffing and soaring leads, which could be found in every song of the set.  In terms of the physical performance, Joel didn’t move around much on stage, but he was able to let the music do the talking for him as he strummed his acoustic guitar with a content expression on his face.  The band brought the evening’s festivities to a satisfactory end and, like James and the Wild Spirit, showed its experience on the local concert circuit with a very tight performance.

All told, it was a wonderful night of music at Exit/In.  Be on the lookout for these three bands as they continue to play around town!