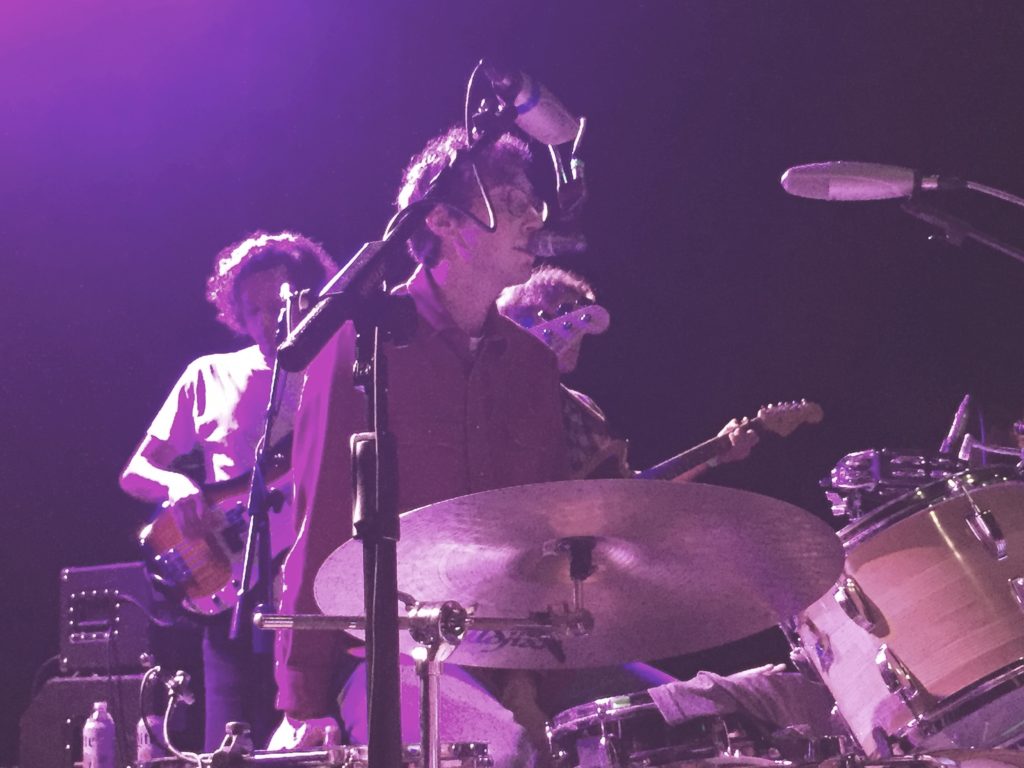 Everyone’s new favorite band, Whitney, has captured the hearts of many an ironic-flower-crown American millennial with just half an hour (exactly half an hour) of recorded music. At Exit/In Monday night, they recaptured those same hearts during the first show of their fall tour.

I would be remiss to neglect the holistic aura that Whitney projects from the start: one of complete modesty. What makes Whitney so cunning is their exuding of innocence—the who-knows-what-we’re-doing-getting-famous image—even though they, of course, likely know exactly what their doing, having been members Smith Westerns (and Unknown Mortal Orchestra, in the case of frontman Julien Ehrlich). It’s certainly not an act; the innocence seems entirely genuine, and that makes it all the more accessible. And it also isn’t irritating or to the detriment of their sincerity—on the contrary, it is in fact what makes them so endearingly appealing.

That was all on full display at Exit/In last night, where shy and clumsy, witty banter met flawlessly coordinated riffs and expertly synchronized musical cues. It’s rare (but welcome) to see a drummer-frontman, but Ehrlich plays the role with ease. But in short, even if you don’t care for their music (which would be baffling to many to begin with), Whitney is unfailingly likable. They floated through “Dave’s Song” with astounding maturity and grace—I witnessed tears in the crowd. Naturally, “No Matter Where We Go” was a fun standout—despite being arguably the most upbeat of their short album, it’s far from formulaic, and Whitney managed to bring some subtle innovation to their performance, being playful while still effortlessly hitting each note. 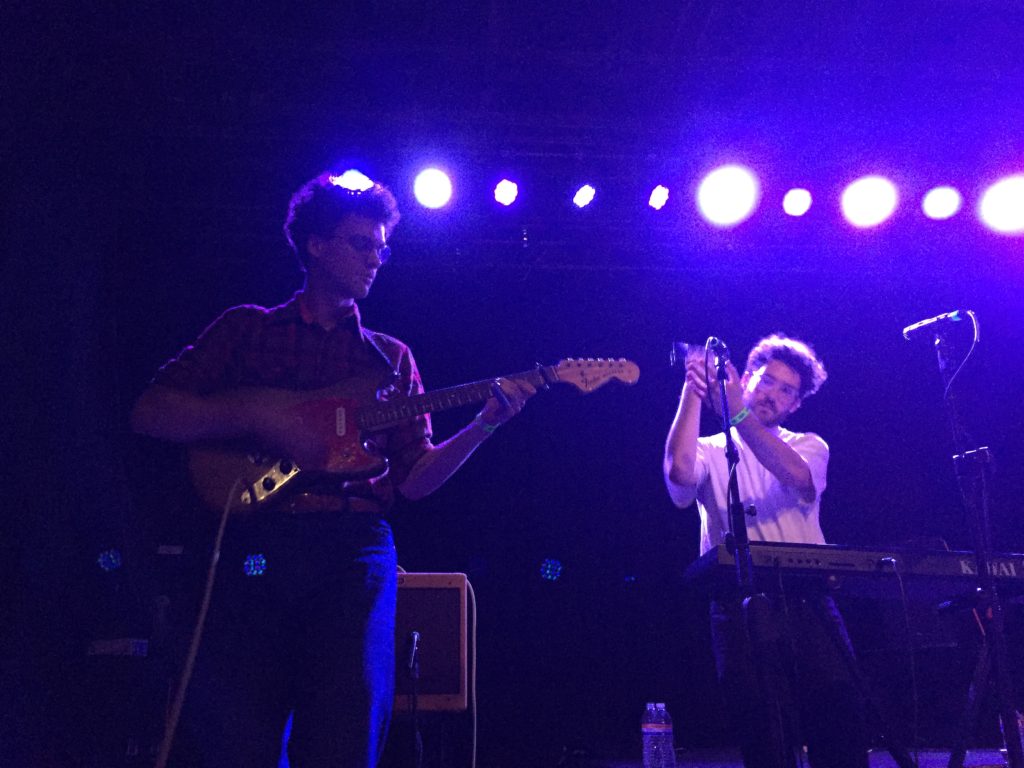 It seemed as though some of the levels of their instruments were a little off at first—keys too loud, then not loud enough—but once those were fixed (nearly immediately) they took off with grace. Their smooth coordination and synchronicity was openly evident during their performance of both “Polly” and “The Falls.” The songs that are heavily carried by trumpet, like “Polly,” still manage to be simultaneously refreshingly new and somehow nostalgic. Their cover of Bob Dylan’s “Tonight I’ll Be Staying Here With You”—location-appropriate, as it’s off Nashville Skyline, as Ehrlich aptly pointed out—fell just slightly flat, with faded vocals that seemed like somewhat of a misplaced diversion, but only in comparison to the rest of their stellar performance. That being said, they made up for it and then some with an energetic cover of Yo La Tengo’s “Magnet” during their encore.

Speaking of the encore, Ehrlich prematurely announced that they’d be doing one; despite this, the anticipation to hear “Light Upon the Lake” and “No Woman” was palpable. With good reason: “Light Upon the Lake” was downright chill-inducing, with the drums seeming almost cuttingly invasive in that kind of off-kilter-but-sad-and-comforting way. “No Woman” was given the modest introduction of “this song is about a girl.” The band has certainly come a long way from their 5-person attendance at their Fond Object show two years ago, but their performance has remained humble and, well, beautiful. 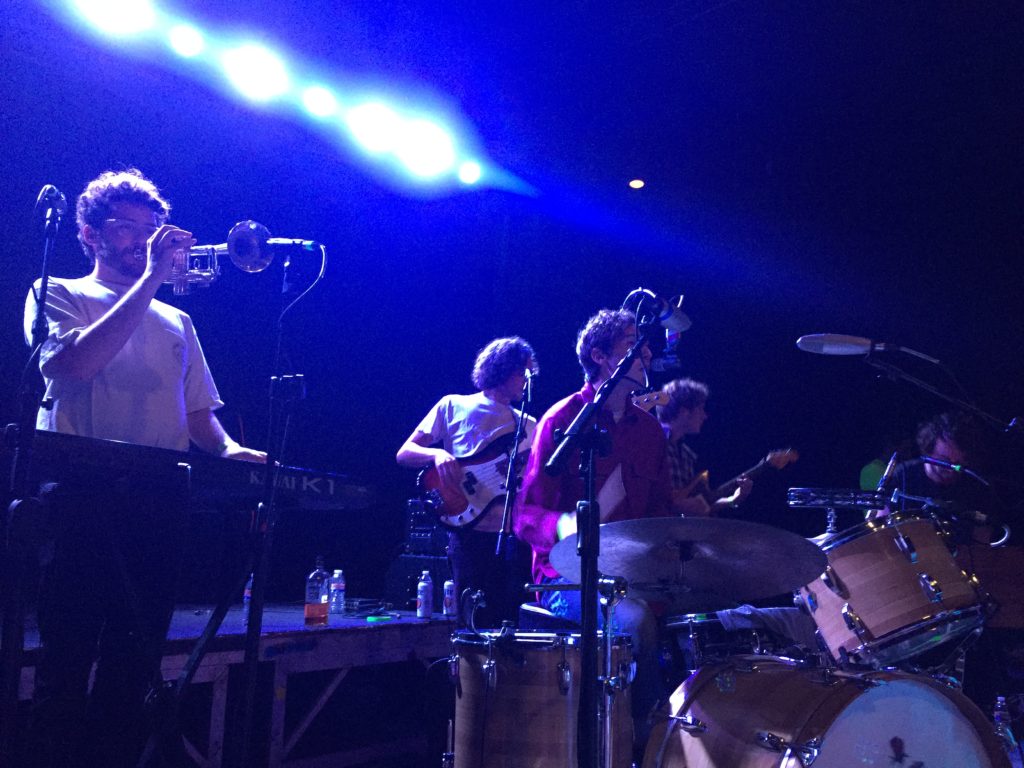 Whitney basking in the soft blue light they requested at Exit/In, Oct. 3rd.

Though Whitney is undoubtedly blazing a trail of their own, it’s hard not to notice the similar aesthetic—whether intentionally cultivated or not—to bands like, say, Vampire Weekend, whose idiosyncratic void of accessible-and-yet-distinctly-unique music hasn’t exactly been filled by an instantly-successful band yet. Even the motifs are similar: delicate pink flowers adorn both bands’ gear and merch. The fans share a certain, ahem, aesthetic as well, of course (I admittedly am among these fans, clearly).

Whether or not Whitney is capitalizing on this distinct place in indie rock, they have big shoes to fill—and, as they demonstrated at Exit/In on Monday, they are more than filling them already.

If you haven’t graced your ears with their album yet, check it out: