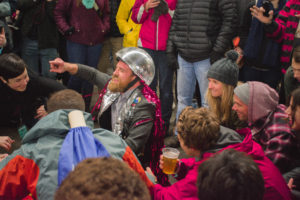 The frozen air immediately slapped me in the face as I stepped out of the car into Old City, Knoxville on my way to Rhythm N’ Blooms. In the same vein, watching the groups of festival goers walking around the neighborhood I wondered what conditions in the world would permit so many people to leave the comforts of their home to fare this kind of tortuous weather. I’ve always been fascinated by the culture of festivals. My fondest music memories as a teen involved violently moshing to the likes of post-hardcore bands Counterparts and Dance Gavin Dance. The collective being near-death experience that I shared with the concert goers gave me an emotional outlet; more importantly, being at hardcore shows gave me a sense of belonging in a community who also found value in these types of experiences. This near-death feeling — the screaming, fist throwing, violent thrashing — became a part of my conception of “a fun concert-going experience.” So needless to say, a festival that seeks to honor the identity and spirit of East Tennessee feel a little out of my traditional conception of “a fun concert-going experience.” However, after a weekend of exploring this new conception of “fun,” I quickly discovered the quirks of this intimate festival. Here is a list of rad things I encountered during my time at Rhythm N’ Blooms: 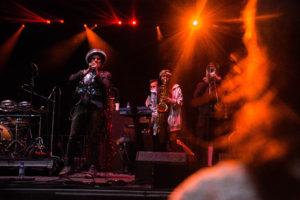 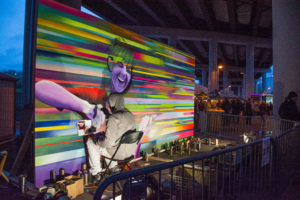 It is with my experience at RnB that I truly began to understand the essence of why I found hardcore shows so fun in the first place. Once I removed the intense thrashing, emotional lyricism, and face-melting breakdowns, the thing I truly yearned for through music lay in the connectedness I had with the artists and those around me. The Knoxville tradition of candidness, soul, and companionship shine through in their careful selection of artists, venues, and décor. There something about singing a song in unison with another human in the same space can make you feel full. In times of extreme cold, it may see counterintuitive for any sane human to choose (let alone pay), to stand outside for 3 days. However, I think I’ve come to the realization that perhaps Knoxville native and non-native festival goers — in unobtrusive opposition to the intuitive — sought refuge from the frigid temperature by embracing the coldness, bringing to light a new, exciting, and inviting sense of warmth.