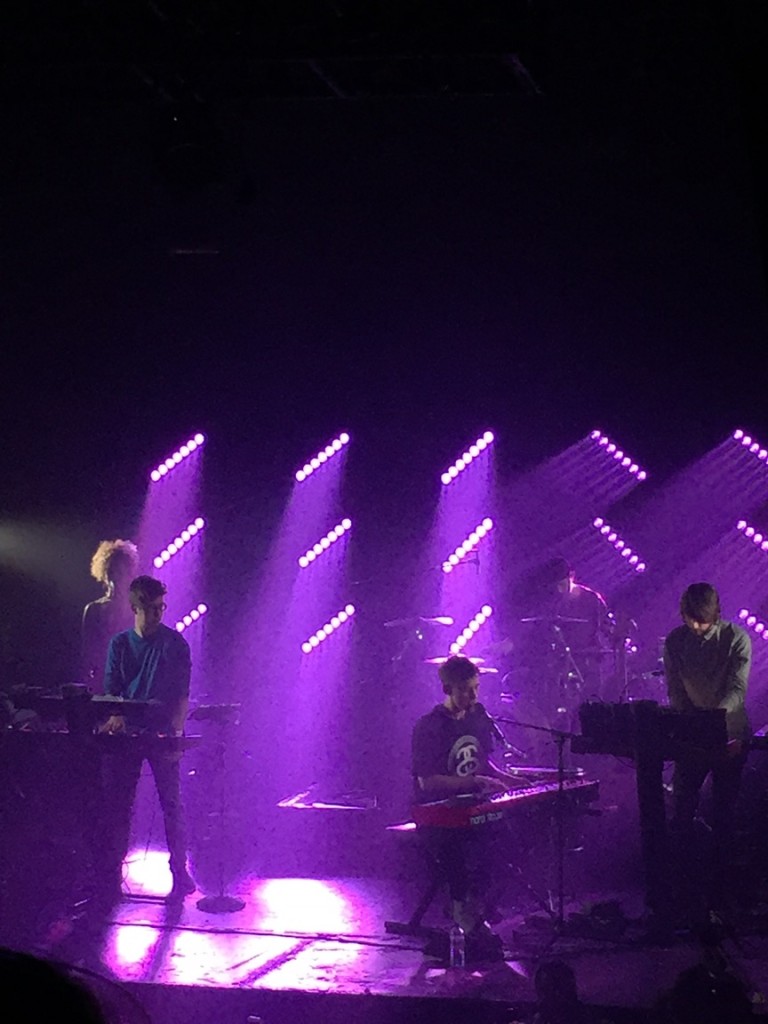 Like my colleague Brandon Bout, I made sure to catch a live show over Spring Break.  For me, the destination was London and the band was electro-pop trio Years & Years.

I had heard of the group from a fellow Lightning 100 intern in December.  She had spent time working in Britain and assured me that they were on the verge of blowing up across the pond.  Her promise was confirmed when I learned that Years & Years had won the BBC’s prestigious Sound of 2015 poll–an award won in previous years by such acts as Sam Smith, Adele, and Ellie Goulding.  So when I saw that the band would be playing in the British capital during my stay there, I convinced my traveling companions that we needed to go to the concert.

It took my friends and me a half hour of baffled wandering around the Charing Cross area to find Heaven, the venue for the evening’s entertainment.  The legendary gay club had opened its doors to patrons of all sexualities with the understanding that at the show’s conclusion, all straight attendees would hightail it to the exits.  It must have been strange for any regulars to see such a high volume of young women in the crowd, undoubtedly attracted as much by Years & Years’ catchy, R&B-infused dance music as by the boyish energy and soulful tenor of frontman Olly Alexander.  We picked our way through the audience and eventually found ourselves on a sort of balcony on the right side of the room, with an unobstructed view of the stage and a clear shot down a short flight of stairs to one of the bars. 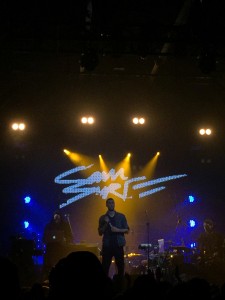 Two opening acts whetted our ears’ appetites for the main course.  Sam Sure kicked things off with a short set of warm, melodic slow jams, setting a perfect ambience for audience members looking to grab a few drinks and groove out.  He loomed large on the stage, luring in the crowd with a sweet falsetto and an easy smile between songs.  The highlight of his set was “Hunger,” a wistful and atmospheric peek into his soul set over thrumming synths and sparse drums. 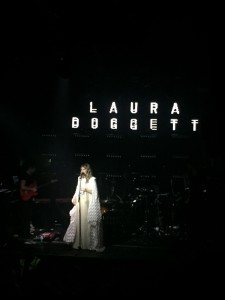 Sure was followed by Laura Doggett, who came on stage wearing what looked like a bridal gown and matching white cape.  The getup gave her a massive, ghostly profile behind the microphone, which was then accentuated by her husky, rich voice–at times, if I closed my eyes, I couldn’t tell whether the person singing was a man or a woman.  Her entire set felt as though it took place in slow motion, with synths and a live cello rising up ethereally behind her as she drew out her soulful melodies over the top of it.  She gave me the impression of a 1940s jazz lounge singer brought into the heat of the electronic music age, combining the two influences into a dreamy, surrealist sonic landscape.  Her song “Phoenix” represents her sound well–when she performed it live, the audience was hypnotized.

By the time Sam Sure and Laura Doggett were finished playing, I was mentally primed for some mind-blowing electro-pop to be delivered by the headliners.  Years & Years shattered even these lofty expectations.  It’s impossible to judge a band’s frontman by studio recordings, so I had no idea that Olly Alexander would be such a riveting and electric presence on stage.  He arrived on stage wearing a black t-shirt and black sweatpants tucked into white socks, giving him a youthful look that was complemented by his flouncing mop of curly hair.  His beaming smile and swerving hips entranced the audience just as much as did his delicate yet powerful voice, and he kept everyone engaged with his breathless, excited chatter between songs.  It was clear that he was just as excited as the crowd, with good reason–this was his band’s first headlining tour, they were back in their native London, and it had become evident over the previous week that Years & Years’ single “King” would debut on top on the British pop charts, the group’s first number one hit.  Also, as he told us, this was their first show where laser lights featured in the visual effects. 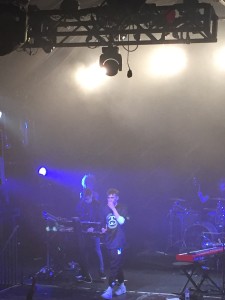 They opened their set with the jaunty “Take Shelter,” a track off the band’s Y&Y EP that had the room swaying bouncily in time to the Latin-inspired beat.  Over the course of the next hour, the band played every song off the EP, a couple other standout releases such as “Real,” and a few brand new songs that Alexander announced would be appearing on a forthcoming album, all of which garnered raving cheers and applause from the crowd.  The set alternated nicely between smooth ballads, on which Alexander played piano, and high-energy dance songs underlaid by staccato bass and drums and punchy synth chords.  It is the band’s ability to slide seamlessly from one style to the other, from slow jams reminiscent of R. Kelly and late-90s boy band ballads to thumping club bangers, that separates these rising stars from the rest of the genre.  The melodies were catchy enough to be picked up by novice ears before each song finished–I was singing along effortlessly by the second time through each chorus–and Olly Alexander’s infectious verve stood out to me among the frontmen I’ve seen.  The standout songs of the evening were “Desire,” which sounded as though South Beach had been transported to England, and the aforementioned “King,” whose warm synths and arching chorus drew me in immediately.

If you’re into synth-pop, or even if you aren’t, now is the time to jump on the Years & Years bandwagon.  They’ll be kicking off their first American tour with a gig at SXSW in nine days, and I’m sure they will emerge as one of the festival’s standout newcomers.  They remind me of CHVRCHES but with more of a pop sensibility and a sound better suited to clubs than arenas, and given the rise of electro-pop music over the past couple of years, Years & Years seems primed to take their chart-topping success across the Atlantic at some point this year.